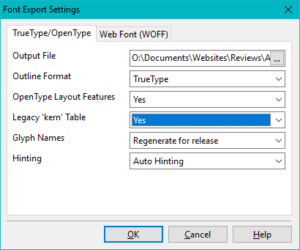 Open the OpenType Designer (Ctrl+F8). If a font has no OpenType features yet, or if you clear the existing features, the dialogue will look like this: No scripts, no features, and no lookups. 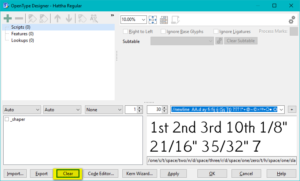 If you click on the Code Editor… button, you will be presented with this dialogue asking if you wish to add some common OpenType features to your font. Click on OK to accept the suggestion.

FontCreator will now search your font to see what glyphs it contains and add some common OpenType features with suitable lookup tables for your font. 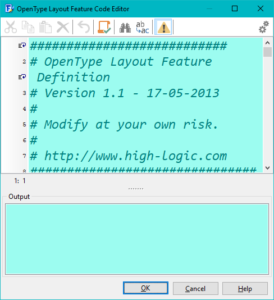 Close the dialogue to see the folder tree listing the Features and Lookups added to the Default language. 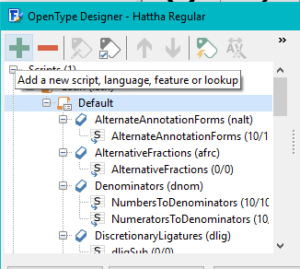 Adding the Feature and Lookup Table

With the Default language selected, click the Big + button at the top left to add a new OpenType feature to your font. 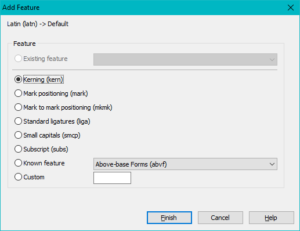 The Kerning feature will be selected already, so just click on Finish to add it. 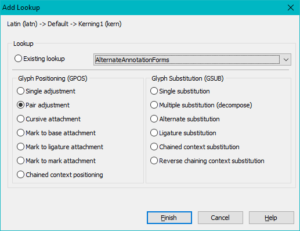 You now have an empty Kerning feature and lookup, so you need to add some adjustment pairs to the table. Click on the Apply button at bottom right to save your changes. Repeat this regularly as you add more kerning pairs to the lookup table.

Modern fonts may have thousands of adjustment pairs. The Professional Edition of FontCreator can automate this process with the Autokern feature. The Home Edition can greatly speed up the process by importing scripts exported from other fonts. To add adjustment pairs, click on the Big + button below the list of subtables.

This will open the New Pair Adjustment dialogue. 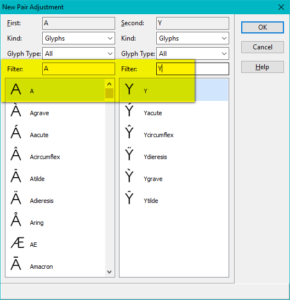 FontCreator supports the kerning of pairs of Glyphs, e.g. AY or pairs of kerning classes. A kerning class like @A_Caps will include A, À, Á, Â, Ã, Ä, Å, Ā, etc., while the @Y_Caps kerning class might contain Y, Ý, Ŷ, Ÿ, Ỳ, and Ỹ. Kerning classes can contain many more glyphs, but just with these few, one kerning pair of @A_Caps with @Y_Caps will generate 48 (8×6) kerning pairs. This is many times more efficient than adding individual pairs of glyphs, but for now we will skip that, and just add a few pairs for AY, AW, AV, and AT for illustration purposes. 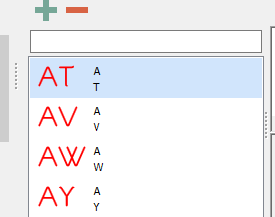 Click the Big + again (or use the shortcut key Insert) to add another pair, and clear the Y from the filter for the second glyph. Now you see why I started at the end of the alphabet: W will be visible in the list. Select that and click OK to add the AW pair. Repeat until done. 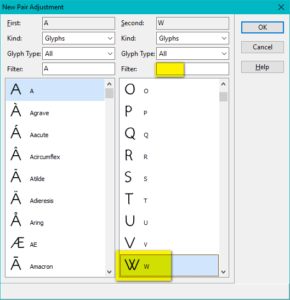 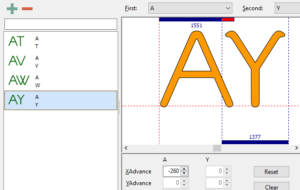 As noted above, it is much more efficient to use class-based kerning instead of kerning individual glyph pairs. At the top of the OpenType Designer dialogue, click on the icon to Open the Class Manager. My Verajja font already includes a lot of kerning classes for Capitals, Lowercase, Small Capitals, Petite Capitals, etc. 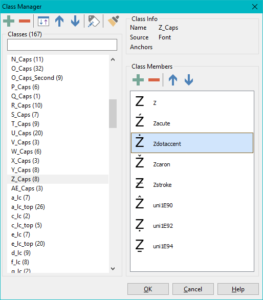 The @Z_Caps class contains eight Z glyphs. I deleted the Z acute, then clicked on the + sign to add it back again. After typing Z in the filter, the Select Class Members dialogue shows all glyphs with z in the name, except for those that have already been added to the class. I can quickly see that Z acute is now missing, and select it for adding back.

A pair like Ta can be kerned more tightly than a pair like Tä, so I have two separate classes. 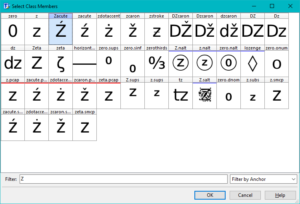